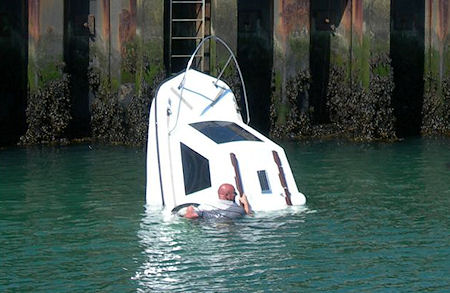 via YahooNews. Several boats gathered on May 31st in Northern Ireland to commemorate the 100th anniversary of the launch of the Titanic. Briton Mark Wilkinson took his newly acquired boat (a 16-foot cabin cruiser), named the Titanic II, out for it’s maiden voyage, and it promptly sank. Lol. Hat Tip: Amar

“If it wasn’t for the harbourmaster I would have gone down with the Titanic,” Wilkinson, who had to be fished out of the sea at West Bay harbour in Dorset, told local media. “It’s all a bit embarrassing and I got pretty fed up with people asking me if I had hit an iceberg.”