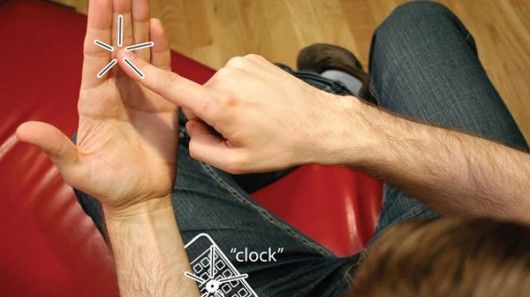 via gizmag. Don’t really see the point of this, but it’s pretty cool regardless. Video below.

Students at the Hasso Plattner Institute in Potsdam, Germany have created a new concept for smartphones they call the “imaginary phone” concept. The premise of the idea is to allow users to be able to do micro interactions with their phones, without actually having to interact with their phone. Working with the phone on a daily basis gives us a fair idea of the buttons and operations that could be done without even looking at the phone.

Currently, the concept utilizes depth sensitive cameras to recognize hand gestures like tapping and sliding to ultimately convey the information to the smartphone. Patrick Baudisch, a professor of computer science at the institute believes the idea could come in useful for certain interactions where the imaginary phone serves as a shortcut to rid users of common mundane tasks.