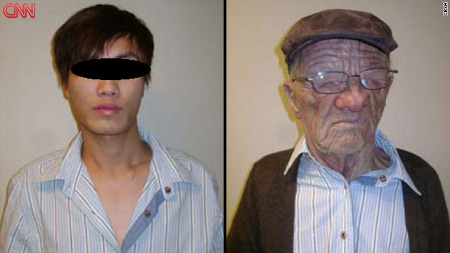 via CNN. If for some reason you missed this on CNN, here’s the story. Apparently, a man boarded an Air Canada flight (from Hong Kong to Vancouver) disguised as an elderly man… he went to the restroom and removed the mask (must’ve been getting hot in there), and then returned to his seat as a young Chinese man. Obviously, this caused some confusion, and Border Services Officers were waiting for him when he landed. There is no further information about why he decided to do this… I think the young looking hands should’ve tipped someone off.

“The passenger in question was observed at the beginning of the flight to be an elderly Caucasian male who appeared to have young looking hands. During the flight the subject attended the washroom and emerged an Asian looking male that appeared to be in his early 20s.”
The agency would not discuss when or why the man put on the disguise or details about how he boarded the plane. But the alert indicated that the suspect boarded the plane with a board pass belonging to another passenger.

“It is believed that the subject and the actual United States Citizen passenger (whose date of birth is 1955) performed a boarding pass swap, with the subject using an Aeroplan card as identification to board the flight,” the alert said.